I was walking around the business section of my library last week and saw something about virginity and picked it up. Luckily it was a fantastic read by Richard Branson. I read this in a week and loved it. Richard Branson does not preach the ways to be successful or the right ways to run a company but demonstrates how he did it.

If you are a conservative person working corporate or running your own business this influential book shows how Branson took risks every day and had fun while doing it. 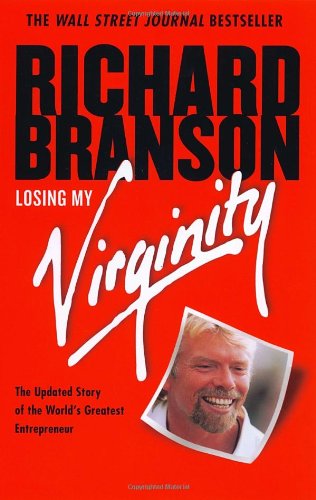 Great lines from the book:

Noah's Recommendation: Read it. There are a few slow parts that I skipped but overall it is a great tale of how he took his student magazine and turned that into a huge global company. Branson is amazing at seeing neglected opportunities and taking big risks on them. A great inspirational read to go out and change the world.

If you enjoyed this post, get free updates by email or RSS.

5 responses to “Book Review: Losing my Virginity by Richard Branson”

It must be longer ago than I remember that I read this--I can't remember the wife swapping part. I do remember there was a very interesting story about John Lennon.

What's great about the book is seeing how fearless Branson is. He's ready to take on anything. I can't imagine ever getting to his level in that regard, but it's something to shoot for.

Read this book about 3 - 4 years ago; very inspirational. Thanks for writing about it, I really need to buy another copy of the book.

Noah- great recommendation. I read this book years back and I can clearly remember reading every one of those quotes. The great story and lessons the book shares stick with you. - Nat

I picked up the book while strolling through the aisles at borders for similar reasons and ended up spending the next 5 hours devouring the entire thing. Definitely a great read.
-Nii